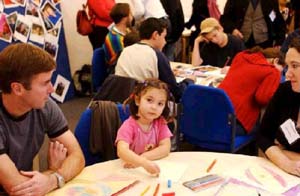 I have worked with a very wide variety of groups of people in demanding situations to inspire them to produce artwork. For their enjoyment, personal development and education.

Invited to contribute to The Guardian's Big Draw event 2002 to 2012. I worked with readers and their children to produce drawings inspired by my own artwork. As a part of the Big Draw's national, annual campaign to encourage everybody in the country to draw.

2004 Worked with the children of Evline Lowe School in Southwark to produce banners for their school carnival.

2005 Did artwork with patients in the Evelina Hospital School within in Guy’s and St Thomas' Hospitals. In both the adolescent, psychiatric unit and the children’s wards. Produced large group paintings exhibited at the Open day for the new Evelina Children’s Hospital.

Running artworks workshops for children at the Café Gallery Projects, Southwark and the Livesey Museum for Sure Start. The government scheme to help children under five in deprived areas of the country 2003.

Children visited Peckham Library to see my work and discuss it with me. At a later date I went into the schools and got the children to produce images inspired by their visit 2001-2.

Taught art therapy on a multi cultural counselling course for Women, 1992-94 for Women's Training Link. An organsation which trains women who are for various reasons disadvantaged in the work place.